Why I went and if I found what I was looking for, is another story. But the fact is that, suddenly, I realized that I was walking through an Inuit village in South Greenland called  Alluitsup Paa. I was living among strangers since few days ago; different personalities, different countries. As hours went by, we were becoming friends. «When you travel you know special people, from different cultures, but also know special people from your same environment. And when you connect with them, that lingers connection although you never see them again. Because in these trips you find out everyone how it really is. You end up showing your true self.» These are the words Pepe told me just yesterday. Currently he is flying with Rosa to Indonesia.

Dawn was cold (for us) and the nearly two hours sailing in a zodiac had not helped at all. Aka, patron of the boat and Inuit hunter offered us shelter in his house for lunch. I admit my ignorance about Inuit culture. But I think it isn’t bad in order to avoid prejudices and to let know them as they are.  I’ve barely scratched the surface of their world, but I have taken the following impression: they are quiet, friendly and at the same time tough people. And surprisingly, they are curious.

I went for a walk alone through the village. In half an hour we had to met  in Aka’s home to eat our usual picnic. I went to the small port looking for activity but there wasn’t movement. One of the folks was writting on a paper the captured fishing, sold or who knows  what. I made some stolen snapshots. He looked at me and then came and spoke to me. In a hesitant and plenty of accent English (like mine) asked me if I was Spanish. To my statement he told me that he had met two Spanish guys who taught him to say “me llamo Jorge» ( my name is Jorge). Also he had two nieces who teached him to say «Te quiere»(I lov@ you). «Te quiero» (I love you), I corrected him smiling. He repeated, properly. Then I asked him how to say it in his language. He pronounced. I repeated. I forgot it. He repeated. I repeated. I thought I got it, and we keep talking about other things. When we were about to say goodbye I realized that I couldn’t remember the word. He repeated again. He never erased his affable smile. If Inuit people have something, that is smile and patience. It occurred to me to ask him to write the sentence. His face brightened. He opened his wallet and pulled out a yellow»post it», and wrote the complicated word. Thank you, I said. He looked at me and asked me to write it in my language. I wrote just below. I fold the paper and broke it into two pieces. He toke his Spanish “Te quiero” and I toke my Inuit “asavakkit”. We said goodbye with a friendly smile and sincere handshake. 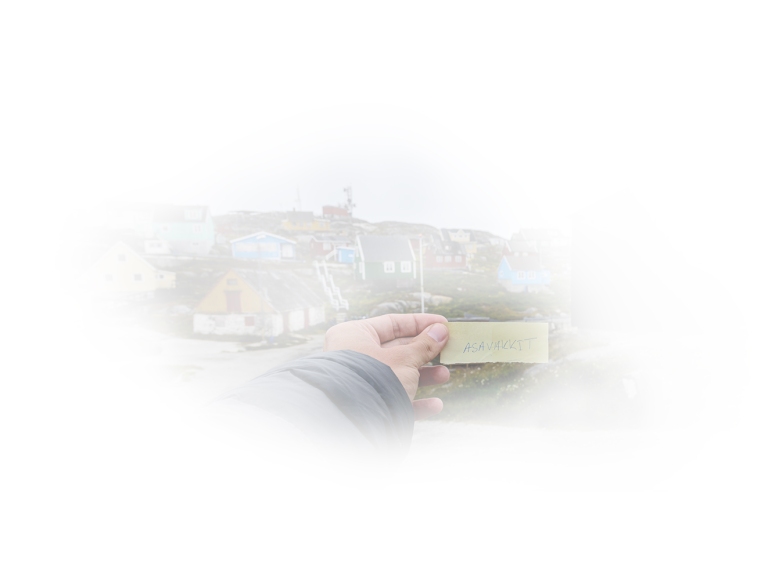